March in my vegetable garden

March in My Green Garden

After a hot and very dry summer in Melbourne, most plants are almost finished and so there will be a lot of clearing up.

And then planning! This time of the year, once the summer crops are out, I’ll sit down and plan the winter garden. I always aim to rotate my crops. At the very least, I’ll make sure that broccoli doesn’t go in where it did last season.

Then there’s soil rejuvenation. Time to empty out the compost bins once again to rejuvenate the soil after the excesses of mega-production over summer. Some nice gentle cow poo won’t go astray and maybe even some mushroom compost where the brassicas (broccoli, cabbages, Chinese greens) and the garlic  will go. Can't see this happening before the end of the month as the plants are still in good production but planning and seed raising can always happen.

Speaking of garlic, it’s still a bit early to get it in but it's a good time to source some. If you've got none of your own (homegrown) garlic to plant, get some from an organic greengrocer, at a farmers market or good nursery. In the meantime, once the heavy feeding vegies are out (tomatoes, zucchini, cucumbers, eggplant) the soil can be prepped a bit in time for the garlic. Around Easter is my target to get it in, but you put it in as late as the June solstice in Melbourne. Ideally though, by the end of May, according to commercial garlic growing experts. For detailed notes on getting great garlic, click here.

My seed-raising frame will come into use again soon to get some winter veg sown before they are ready for the garden. I sow and leave the seedlings to sprout indoors as they won't germinate properly if it's too warm, but take them outside once germinated to get some gentle morning sun until the soil is ready to take them ie when I've cleared out the summer crops and prepared the beds. Broccoli, kale, cimi di rape, silverbeet, spinach and spring onions will go in this way. Broadbean seeds will go directly into the soil, as will beetroot, carrots and radish. Phew! I’m exhausted just talking about it all…

March in the Kitchen of My Green Garden

At this time of the season, I'm scrounging around for jars! In December, I've got boxes and cupboards overflowing with empty jars waiting to be filled. Now they're all full of loads of yummy preserves and adorning my pantry, but there's still more to be done.

Preserving and cooking with more tomatoes which are ripening fast. I like to make jars of peeled and chopped tomatoes using a bottling/heat preserving technique. Dead-easy if a bit messy. I will also make jars of a simple ready-to-pour pasta sauce using the excess ripe tomatoes.

If the zucchini fritters, zucchini slice, zucchini pasta and zucchini chocolate cake is starting to feel a bit repetitive, I will make some more zucchini under oil. This preserve keeps well and is delicious.

So if you want to get into preserving lovely seasonal produce, start asking friends and relatives to save jars big and small for you! 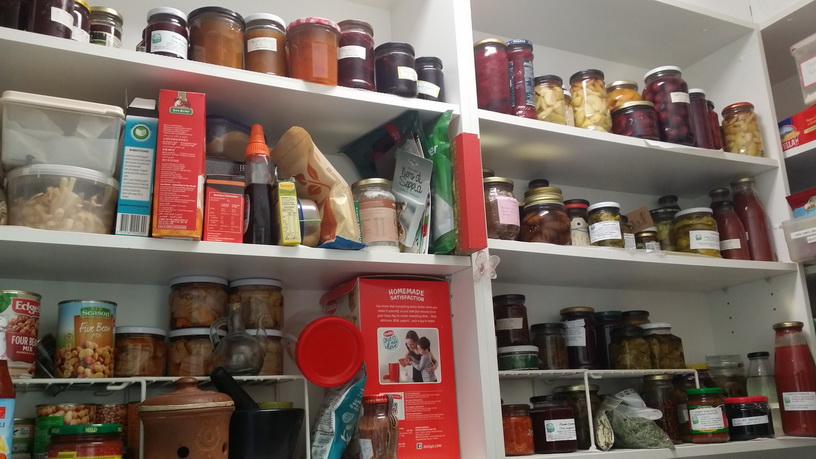